Like most people, I have fund memories of late nights/early mornings spent at the local Perkins restaurant. If you're one of the unlucky ones to live in a state without Perkins, you have my sympathies. When I was younger, it was either Saturday morning breakfast with grandma and grandpa, or Sunday morning family breakfast/lunch with friends from church. In high school, it was where we'd gather with groups of friends to hang out (especially when Dairyland wasn't open, either because it was closed for the season, or it was too late at night). In college, it was where we'd gather with groups of friends to hang out or study (often into the wee hours), or satisfy that odd craving for a slice of their amazing French Silk pie and a plate of onion rings (a combination I ordered way more times than I like to admit).
When I was younger, one of the things they were known for is serving things (noteably, salads) in bread bowls roughly the size of the average human head . I was so intrigued by the concept of the breadbowl that I found myself ordering various breadbowl salads frequently, despite the fact that I didn't start liking salads until I was about 17. Much to my parents probable chagrin, I ended up eating the breadbowl and the rest of the salad accoutrement, but none of the lettuce.
Then, I discovered their chicken tender melt. Crisp chicken tenders, bacon, and melted pepperjack cheese inside grilled sour dough with a ranch dipping sauce. Delicious! Of course, like a large portion of my favorite chain restaurant items, it's since been taken off the menu. So I tried re-creating it at home. And it was a success. 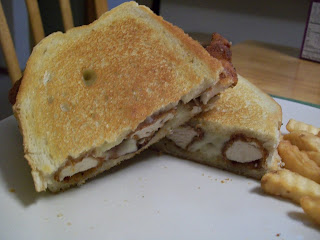 Chicken Tender Melts
Inspired by Perkins Restaurant
Serves 2
INGREDIENTS
6-8 chicken tenders (we made our own)
4-6 slices pepperjack cheese
4 slices sourdough bread
4 strips bacon
DIRECTIONS
Cook the chicken tenders until cooked through. I think frying the chicken tenders would produce the best results (and more true to the original), but I think baking them or even using grilled chicken breast strips would  also be really good.
Cook off a few strips of bacon. Drain and set aside until you start making the sandwich.
Assemble the sandwich like you would a grilled cheese: butter the outsides of two slices of sourdough. Place on top of it 1-2 slices of pepperjack, then 3-4 chicken tenders, then 2 strips of bacon, then another 1-2 slices of pepperjack. Top with the remaining slice of buttered bread.
Grill over medium high heat until golden brown on both sides, probably about 4 minutes each.
Posted by Elizabeth at 11:15 PM

We don't have Perkins here, but i'm a sucker for anything with a bread bowl...or...bread for that matter! This is definitely the kind of sandwich to be craved!

I hate Perkins, I could only ever eat their breadbowls and this sandwich. We're totally having this for dinner tonight.

That looks so good! We don't have a Perkins here - or if we do - I don't know about it!

Good memories and my kids would LOVE that sandwich

We have a Perkin's here, and that is still on the menu! I just ate it yesterday. :)