For those of you in the state, you're supposed to read that title as per the theme song that's been playing on the commercials for the past month or so. Anyway, I haven't forgotten about my blog. I haven't been purposely neglecting it, either. We moved, so I haven't been doing much any cooking lately. So... enough with the excuses and onto the good stuff.

Every year, like virtually every other Minnesotan I know, we wade through the crowd to go to the great... no, food fest... no... celebration of deep fried wonderment on a stick that is the Minnesota State Fair. If you add the attendance numbers together from each day of the fair (ignoring that many people go more than once), I think more people attend than actually live in the state. 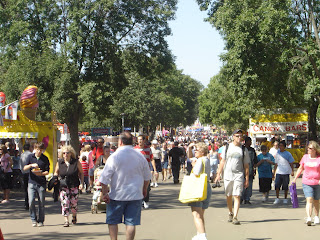 People don't go to the fair for much other than the food. Sure, there are the animal barns where the outstate folk can show off their prize-winning pigs/cows/chickens/gigantic turkeys, and the city folk can actually see what a pig/cow/chicken/gigantic turkey looks like... but that's really just something you do in between the various food items.

Everyone has their favorites that they repeat over and over (unfortunately for me, mine are so far favorites that I crave them year-round, so once it's fair time, I am so hungry for them that I don't feel like I can cut anything out to try the newest hot dish on a stick or macaroni and cheese on a stick or whatever they manage to fry and put on a stick that particular year). My favorite is, by far, the Pronto Pup. 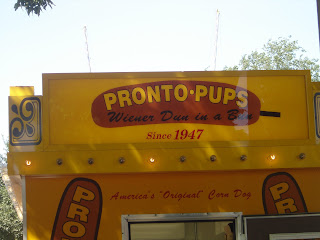 To be completely clear: a pronto pup is not the same thing as a corn dog. I cannot stress this enough. Sure, it's a deep fried, breaded hot dog on a stick, but it's so much better than a corn dog. See, the difference is that the batter on a pronto pup is made from wheat, not cornmeal. In my experience, the coating is quite a bit thinner than a corn dog breading, and much more crispy on the outside. In short, they're the best. Unfortunately, I didn't get a picture of the actual pup because by the time we made it through the line and got ours, we were far too hungry to bother with pictures.

Later, I did take a picture of one of the booths to show you how incredibly popular they are. The line was actually about twice this long, but you get the picture. 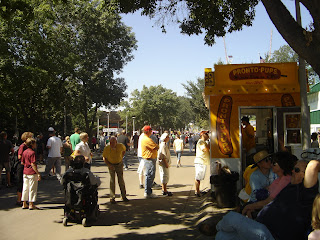 Unfortunately (but somewhat amusing-ly), the closest open place to the pronto pup stand to actually sit down and eat said pronto pup faced us directly looking toward this: 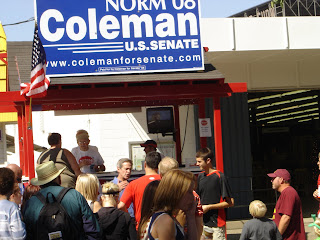 In case you can't see, the guy in the middle with the gray hair is Norm himself.

We thought about heckling, but decided against it.

The next major food item on the list is Luigi Fries. My husband loves these. Basically, they're breadsticks topped with melted cheese, dipped in marinara. They're good, but I think you probably get the picture just by description. 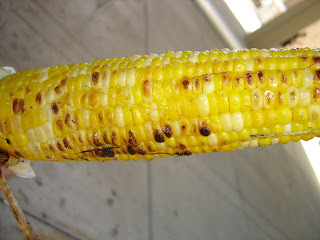 ext, the grilled corn on the cob. I know what you're thinking: what's so special about corn on the cob? In truth, nothing. It's just really, really good. It has the perfect charcoal grill flavor, and they give it to you just after being dipped in a huge vat of melted butter. The whole area smells like roasted corn.... it's an event, really. 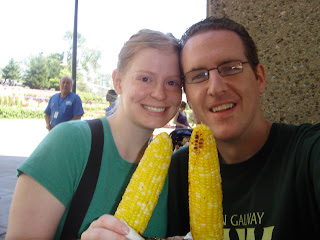 Next, there are mini doughnuts. There are two different brands of mini donuts at the fair, and people argue over whether Tom Thumb or Tiny Tim (or whatever that other brand actually is called) is the better mini donut. My in-laws swear that Tom Thumb is better, so for some reason we just sort of gravitate toward one of those stands. They're really yummy, but unfortunately, you can only eat about 5 of them before you start to feel like a mini donut yourself.

In the meantime, you walk around and check out the baby animals, like this super cute baby goat and two-day-old baby pigs, and make coo-ey sounds over them. 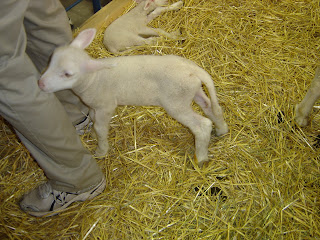 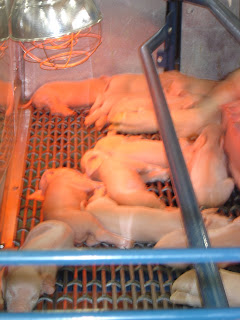 
Next is a Minnesota original (or so I'm told): the deep fried cheese curd. 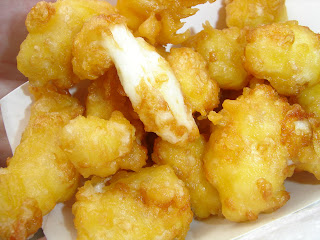 Again, there probably isn't anything particularly extraordinary about these things. They're just really good. And really, how could they not be? They're just little bits of lightly battered, deep fried cheese. The end result is a glob of cheese, batter, and grease. The first bite is heaven. The second bite is good. Third bite... still pretty good. The fourth bite.... well, let's just say you feel like you're going to die.

But, you can't die. There's still cookies to eat!

Sweet Martha's Cookie Jar has been around for 30 years or so, and everyone goes crazy for these cookies. They're always served hot, right out of the oven delicious. 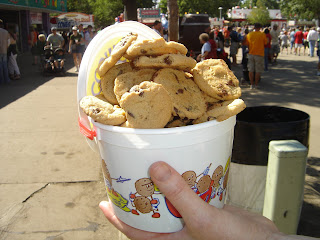 In case you're worried for our health, we're still working on polishing off the bucket.

And then, you get back on the shuttle bus to your designated park & ride area and collapse.

The 100 foods you apparently should eat

This popped up in someone's blog on my google reader from Very Good Taste; a list of things he thinks every omnivore should eat. After looking about a good 1/3 of them up, I think I'm doing pretty well. :)

What he wants you to do:

1) Copy this list into your blog or journal, including these instructions.
2) Bold all the items you’ve eaten.
3) Cross out any items that you would never consider eating.
4) Optional extra: Post a comment at www.verygoodtaste.co.uk linking to your results.

Posted by Elizabeth at 2:32 PM No comments:

Hey everyone - just wanted to remind you that the deadline for Homegrown Gourmet 10 is coming up! Please remember to submit your Homegrown Gourmet Pizza to elizabethscookingAThotmailDOTcom by August 25.
Posted by Elizabeth at 7:43 AM No comments:

I'm making a sincere effort to clean out the kitchen. We're moving soon, and I don't really want to haul a bunch of food over to the new place. It'll do us good, anyway. I'm discovering we have a lot of random stuff. When I was at work today, I wanted something with chicken. So, I got home and started looking through the kitchen. Chicken breasts? Check. What can I do with them.... stuff them, I thought. The Laughing Cow wedges I had sitting in the fridge looked like they were eager to stuff some chicken breasts. So there we go... now what exactly to do with them? I decided to lightly bread them, pan fry them a little, then finish them off in the oven. I'm quite proud of the results. We both gave this rave reviews. 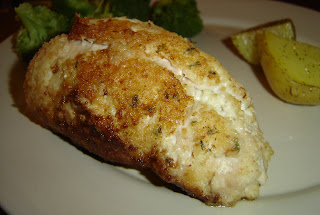 DIRECTIONS
Lay each chicken breast flat. Spread 2 wedges of cheese on each (feel free to adjust for your size chicken breasts or desired level of cheese). Roll up and seal with toothpicks.

Meanwhile, mix together the bread crumbs, parsley flakes, and Parmesan cheese in a shallow dish.

Spray the chicken rolls with cooking spray and dredge them in the breadcrumb mixture. I found it easiest to do this by spraying the tops while sitting on the tray I rolled them on, then dipping that half in bread crumbs, then spraying the other side and rolling the chicken over. I'm sure you could do a regular breading technique, but this was much easier and quicker.

Heat a couple tsp olive oil in a medium skillet over medium heat. Add the chicken and sear on all sides. Transfer to a baking dish or cookie sheet and bake 15-25 min, depending on the size of your chicken breasts and how long you cooked them in the pan. Mine took about 20 min.

Remove toothpicks and serve!
Posted by Elizabeth at 6:18 PM 2 comments:

I believe I've mentioned before that I love Alfredo sauce. My husband isn't what I'd call a fan. He's a good sport, though. He eats it when I make it because he knows I love it. I make him garlic bread to make amends. Tonight, in a sincere effort to clean out the cupboards, I made this recipe for Fetuccini Alfredo that I found tucked away in my "to-try" folder.

I'm not sure I would really classify this as Fetuccini Alfredo because the sauce was a bit too thick and a bit too tangy, but it was good, and definitely something I'd make again when I want something Alfredo-ish without all the fat and calories. 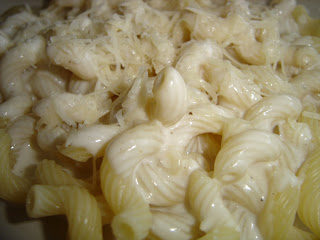 Meanwhile, heat large nonstick skillet over medium heat. Mix broth and flour in same skillet and whisk together. Add cream cheese, 2 Tbsp. of the Parmesan cheese, the garlic and pepper and whisk until smooth; cook 2 min., stirring constantly. If the sauce is too thick, add a bit more stock or some half & half.

I decided it was maybe time to try an actual recipe for Chicken Parmesan. I love the dish, but usually just kind of throw ingredients together and come up with something Chicken Parmesan-like. While you probably won't ever find Chicken Parmesan on a menu at any restaurant in Italy (and if you do, you probably want to leave that restaurant, because Chicken Parmesan isn't a real Italian dish - Italians use veal or eggplant), you should make it at home. Seriously, you need to make this recipe. It's so delicious I could barely stop eating it. 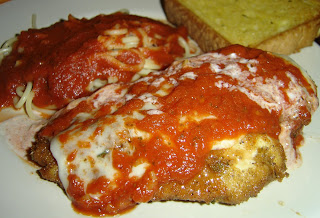 Mix all seasonings together then divide into 2 parts. Season chicken breast with half of the seasoning on both sides. Add half of remaining seasoning and 3 tablespoons of chopped fresh parsley to bread crumbs and mix. Dip chicken in flour, then in eggs, then in bread crumbs. Fry chicken until golden brown, about 3 to 5 minutes). Simmer the marinara sauce in saucepan over medium heat. Place 2 slices of mozzarella cheese on each breast. Pour the warmed marinara sauce over the cheese, drizzle with White Sauce and serve.

*I served this with a side of spaghetti*

I love potatoes, especially roasted potatoes. I have a standby roasted potato recipe that I love, but I'm always looking for something new. I've seen this recipe for "Crash-hot Potatoes" floating around on a few cooking blogs lately and everyone raved about them, so I decided I had to try them. You should too. They're delicious and have the perfect combination of spices and texture. They were a perfect accompaniment to my Oven Fried Chicken Fontina. (Thanks, Annie. We loved it). 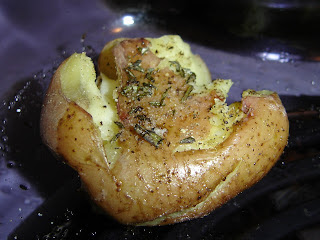 INGREDIENTS
6-8 small, round potatoes, skin on (I used baby reds)
Olive Oil
Salt
Pepper
garlic powder
Chives (or Rosemary - whichever you like. I did half with each) - optional

Add the potatoes to a large pot. Cover with cold water. Salt water & cook until the potatoes are fork-tender.

Drain potatoes and place on the cookie sheet or baking dish. Using a potato masher or a fork, gently squish each potato until they are smooshed down a bit.

Drizzle the tops of the potatoes with more olive oil.

Generously sprinkle each potato with salt & pepper. Add a dash of garlic powder to each potato.

If using an herb, sprinkle that on top.