When I was on vacation a couple of months ago, the resort we stayed at had a great Mexican restaurant. One of the times we ate there, the hostess gave me a Spanish-language menu. I don't speak the best Spanish, but I do alright. It ended up being a great thing, because the Spanish menu had Queso Fundido on it. Turns out the English menu did too, but they called it something like "Melted Cheese Dip." Apparently we were supposed to understand that meant something different than a pot of melted cheese with tortilla chips to dip in them. I knew it was going to be great when the waiter came out with a smoking molcajete filled with the cheesy goodness. I've been searching for similar recipes ever since we got home.
Of course, if I do find one, I'm going to have to find a molcajete to prepare it in, but I'm not concerning myself with that too much. They sell those at Williams Sonoma, right?
Anyway, my search for the perfect queso fundido recipe led me to this recipe. My love of Rick Bayless recipes is no secret. My love of burgers isn't, either. Combine the two? I'm in.
This was a really good burger. The combination of beef, chorizo, and roasted poblano was great. However, the chorizo was a bit strong and I think this burger would also be great without it. I'm considering making them again soon without the chorizo and with ground turkey or chicken instead of ground beef. I'll let you know how that goes. 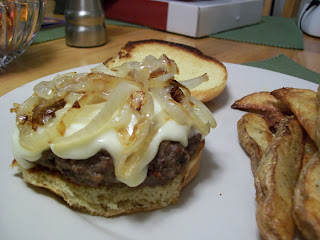 Queso Fundido Burgers
Recipe by Rick Bayless, adapted
Makes 3-4 burgers
INGREDIENTS
1 poblano pepper
1 large onion, half minced and half sliced
2-3 cloves garlic, minced
1 lb ground beef
1/4 lb chorizo
1 chipotle in adobo, seeded and finely minced
salt & pepper
Sliced Monterrey Jack cheese
toasted buns
DIRECTIONS
To roast the poblano, preheat the oven to 450. Put the poblano in the oven for 5 minutes. After 5 minutes, turn it over and roast it for 5 more. Repeat this process until it's blistered and blackened all over (this took me about 20 minutes).
Take it out of the oven and put it in a ziplock bag for about 20 minutes. After about 20 minutes, take it out of the bag and peel off the skin (it's really more like a combination of peeling and rubbing) and take out the seeds and ribs. Chop the poblano into a small dice.
In a large bowl, combine the ground beef, chorizo, minced onion, garlic, poblano, salt & pepper, and the chipotle in adobo. Divide the meat into 3-4 equal portions (depending on how big of a burger you want).
Heat a large pan over medium heat. Put a couple TBSP of oil in the pan. Put the burgers in the pan and cook for about 5 minutes a side.
Meanwhile, put another couple of TBSP of oil in another pan and cook the sliced onions till not quite yet caramelized.
In another pan or in the oven, toast the buns.
Just before the burgers are done, preheat the broiler.
When the burgers are done, top them with the sliced Monterrey Jack cheese and put under the broiler for a few minutes, until the cheese gets melty and bubbly.
Take out of the oven and put the burgers on the toasted buns. Top with the fried onions and enjoy.
Posted by Elizabeth at 2:13 PM 6 comments:

Dishes like this are what happen when I don't know what to make for dinner but discover about a half of a box of fetuccini, a half of a tub of roasted garlic pesto sauce, and some dairy liquid in my fridge. The combination of the roasted garlic pesto with the slightly-cheesy cream sauce was the perfect combination and a great dinner for a cold night. 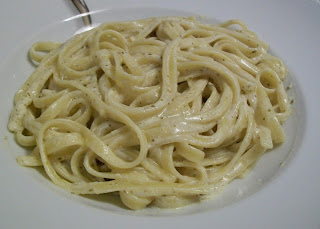 Fetuccini in Roasted Garlic Pesto Cream Sauce
Serves 3-4
Cook & Prep Time - 20 minutes
INGREDIENTS
Fetuccini noodles (I used a little more than 1/2 of a box)
1 TBSP butter
1-2 TBSP flour
2 cloves garlic
1 cup 2% milk
1/2 cup chicken stock
1/2 cup Parmesan cheese.
1/4 cup (or so) pesto sauce
salt & pepper
DIRECTIONS
Cook the pasta to al dente. Drain & set aside.
Melt butter over medium heat in a big pot or dutch oven. Whisk in the flour and let cook for about a minute. Add the milk and stock and whisk. Let cook for a few minutes, or until the sauce starts to thicken. Add the garlic and season with a bit of salt & pepper.
Add the cheese and whisk together. Cook for a few more minutes.
Stir in the pesto sauce and toss with the noodles. Serve and top with grated Parmesan cheese, if desired.
Posted by Elizabeth at 7:59 AM 2 comments:

On Christmas Eve, I decided I wanted to be eating some fudge. I decided this knowing full well that I didn't have most of the ingredients for fudge. The grocery store was out - it was about the last place I wanted to be. I decided to brave Target, and if the parking lot was too scary, I'd just turn around and go back home and forget about the fudge I was so wanting to eat.
It ended up being fine. Much less busy than I thought it would be. The amount of people there who seemed to be doing every last bit of their Christmas shopping (at about 4 pm on Christmas Eve) was a little shocking, but I guess some people don't really plan ahead.
I've made this fudge before and always have great results. I've tried other recipes and they never get quite as smooth as this one. 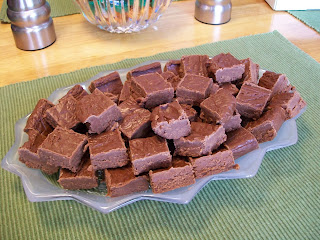 Fudge
Recipe from Carnation
Total Prep & Cook Time - about 15 min
INGREDIENTS
1 1/2 cups sugar
1 (5 oz) can evaporated milk (2/3 cup)
2 TBSP butter
1/4 tsp salt
2 cups mini marshmallows
1 1/2 cups chocolate chips (I used milk chocolate)
1 tsp vanilla
DIRECTIONS
Line an 8x8 pan with foil. Set aside.
Combine sugar, evaporated milk, butter, and salt in a medium saucepan over medium heat. Stir constantly. Bring to a full rolling boil. Keep it boiling and keep stirring constantly for 4-5 minutes.
Remove from heat and add the marshmallows, chocolate chips, and vanilla. Stir until everything is melted and combined. This should take about a minute.
Pour into the pan and refrigerate for at least 2 hrs. When firm, take them out of the pan and remove foil. Cut them into small slices to serve.
Posted by Elizabeth at 8:26 AM 1 comment:

If you've never eaten at one of Rick Bayless's restaurants or made one of his recipes at home, you're truly missing out. I'm amazed by each and every one I make. These enchiladas are really no exception. They're the type of dinner that you tell yourself you're going to stop after one enchilada, but by the time you've stopped eating, you've mysteriously devoured two (or more). 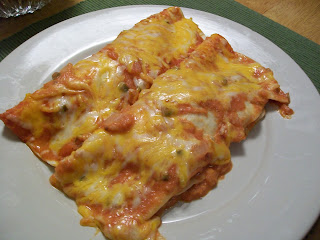 Because I took this out of my Rick Bayless cookbook, I'm not posting the recipe. But that should just be more incentive for you to go out and buy your own copy, right?
Posted by Elizabeth at 6:55 PM 1 comment: