I've started getting sucked into The Voice this season. Past seasons, I've just watched if, for example, it was on when I was at the gym, but I never really tuned in at home or recorded it.  For some reason, I'm totally hooked on this season. One of the contestants is from the city where I live - I tell myself I watch to cheer him on (nevermind that I think he said he moved out of the suburbs a while ago).

Usually when I watch, I have a cat on my lap. In one of the blind audition episodes, said cat started meowing pretty loudly when one of the hopefuls was singing off-key.

Fast-forward about a week or two and The X Factor was on (I wasn't actually watching - I just forgot to turn off the TV when the show I was watching was over). One of the contestants was absolutely murdering a Kelly Clarkson song, and again, the same cat started meowing loudly.

Back to The Voice - kitty was not a fan of the woman who ultimately won the battle where the contestants sang Katy Perry's Hot and Cold.

I'm still haven't decided if I think she really likes bad intonation and is trying to sing along or if she's offended by the bad singing.

This is another recipe I made back when the weather was nice and warm. I miss that weather. We first made  it and used the meat as tacos, but I felt the flavor was too subtle to make a great taco. The second time we made it, we ate it off-the-bone, which really brought out the hints of garlic, onion, and citrus. This will be a great one to make in the dead of winter when I'm really craving a nice hint of summer. 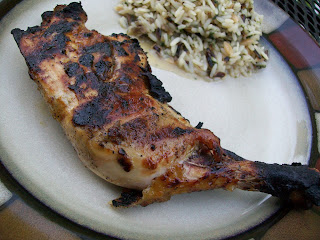 DIRECTIONS
In a bowl, combine the olive oil, orange juice, lemon juice, lime juice, salt, pepper, and garlic. Whisk to combine. Save the little of the marinade for basting during the cooking process, and put the rest in a large ziplock bag and place the chicken parts in the bag. Add the fruit halves and onion chunks. Toss everything to combine. Let sit in the refrigerator for at least 2 hrs, up to over night.

About a half hour before you're going to cook, take the chicken out of the fridge and put it on the counter to get the chill off.

Preheat a grill to about medium heat (or a broiler to high).

Place the chicken on the grill and cook until cooked through, turning a few times, and marinading with each flip. This probably will take about 25 minutes whether you're broiling or grilling your chicken.

*I can not strongly advise enough not to try squeezing your own. My hand muscles hurt for several days after I tried to squeeze my own orange juice for this recipe.
Posted by Elizabeth at 1:14 PM 1 comment:

The magazine companies are on to me. I subscribed to CookingLight about a year ago. Since then, I've been inundated with other magazine subscription offers - Everyday with Rachael Ray, Food Network Magazine, People, Parents, Good Housekeeping, Family Circle, Better Homes and Gardens.... they all want me. I feel so popular.

The sad thing about this is that if it's a magazine I'm even somewhat interested in, and the deal is good, I'll probably subscribe. My husband tells me "oh, but honey, you can get those recipes online." Which is true. But looking them up online is nowhere near as fun as getting a fresh new magazine in the mail every month. I like to think I have the self-control to know when it's time to stop (and hey, I turned down Parents magazine, even though it was truly a great deal. That's gotta count for something, right? Nevermind that I have no children or need for such a magazine).

I made these sandwiches when my tomatoes and basil were at their absolute peak - before the fall weather officially arrived and far before I had to start bringing my plants in at night for fear of frost (I'm not a fan of this weather). You should make them and enjoy them while the you still have access to fresh tomatoes and basil. 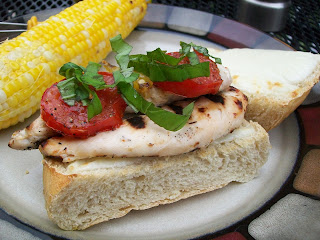 DIRECTIONS
Marinade the chicken tenders in Italian dressing for at least a few hours. Cut the tomatoes and drizzle with olive oil. Season with salt & pepper.

Grill the chicken till cooked through (3-5 min per side or so) and grill the tomatoes till soft.

Meanwhile, cut the baguette in half, length-wise, and put slices of mozzarella. Right before the chicken is done, place the bread under the broiler until the cheese melts and starts to get bubbly.

Cut the basil into little ribbons.

Place the chicken on top of the bread, then top with tomato and fresh basil.