While I don't normally do this, I'm going to write about something other than cooking for one post. I'm sorry to my readers who were hoping for a new recipe, but I think this is important enough to devote a post to it.
Two weekends ago, my husband and I went "up north" to visit my family and spend time at the lake. That Saturday evening was one of the scariest nights of my life. We were outside grilling burgers & pork chops for dinner, and we heard some very loud, repeated popping noises. Considering we were in the country, and basically in the middle of BFE, we both assumed either someone was playing with some leftover fireworks from the previous weekend or was shooting stuff, or something similar. However, it was really loud. And it smelled funny. And made a lot of cracking sounds. And pretty soon the sky was filled with really black smoke. It wasn't fireworks or a gun - it was a fire. And it was 3 doors down from my grandmother's house.
I immediately noticed a girl on a golf cart with a phone up to her ear so I ran over to her and asked if she was calling 911. She said no, she was on the phone with her mother. While I was confused why she found it more prudent to be talking to mom rather than the 911 dispatcher, I ran into the house and called 911. I was comforted someone had called before me, and the dispatcher informed me that the fire trucks were en route. I was told that it was a garage fire, and was instructed to make sure to stay a safe distace away.
When I got out of the house, a crowd of neighbors began to form, standing basically in the middle of the road, just watching the fire burn and marvelling at how high the flames were, how they could feel the heat from the flames even where they were. Soon more people arrived, in cars, parking on both sides of the road, leaving only a small path to drive through, and joined the crowd. Some of them even brought cameras and were taking pictures.
I have never felt so helpless as I did that night as I stood there, in our driveway, waiting for the firemen, watching the fire engulf not only the garage and takeover the storage shed and a nearby tree.
The firemen arrived about 10 minutes after I called 911. Gawkers from the area continued to gather. I actually watched two cars, and several crowds of people, either not pull over for the trucks, or fail to move out of the way.
Thankfully, the firemen were able to contain the fire in less than 5 minutes, and completely extinguish it within 10. The firemen from the nearest neighboring town even came to help out. I'm sure that every one of these men on both all-volunteer squads would've rather been doing whatever it was that they had been pulled away from. I'm sure their wives or girlfriends or families would've preferred that, too. However, their efficiency, and their obvious concern for not only the aforementioned property, but for the neighboring properties as well, was impressive.
In the end, the garage, shed, and the contents of both, including two vehicles, were completely lost, but the house and the neighboring properties remained virtually unharmed. Sure, the front of the deck was charred, and the siding had basically melted off. The siding on one side of the neighbor's garage had melted off and had some smoke damage. The front end of the neighbor's truck basically looked like melted plastic. But the homeowners still had a house to go home to. If the wind had been blowing in basically any other direction than the direction it was that night, the damage likely would've been much more significant and widespread.
I have never been so thankful to live only a few blocks from a fire station with a full-time staff.
And to all my readers, please promise me that if you see a fire or an emergency situation in your area, call 911 immediately. Please do not go out to gawk at it. Do not get in your car and drive to an area where you heard there is a fire, just so you can see it; do not use your police scanner to determine your nightly entertainment. Do not stand in the road, do not park your car so as to make it difficult to impossible for a fire truck to drive down, and do not be so oblivious as to not move out of the way for the emergency vehicles. Use common sense, stay away, and let the emergency services do their job. Just be thankful that you're safe, and hope that everyone at the affected property is safe, too.
Posted by Elizabeth at 1:30 PM 3 comments:

Hello, there. Remember me? Contrary to any rumors you may have heard, I haven't actually fallen off the face of the earth. In fact, I've been cooking quite a bit. I'm very excited to share this post with you, not because I think it's the beacon of culinary genius, but because it's made (almost) entirely with ingredients from my garden. This last week, I was able to pick some green beans! I decided they'd be the perfect companion to the beer can chicken my husband was grilling. And they were. So I picked them, and they were on my plate less than 20 minutes after I picked them.

By the way, have you made beer can chicken yet? If you haven't, what are you waiting for? I told you weeks ago to make it. 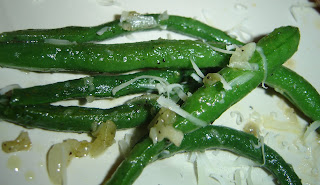 INGREDIENTS
Green Beans
1-2 cloves garlic, minced (this was from my garden, too!)
olive oil
salt & pepper, to taste
grated parmesan cheese, if desired

DIRECTIONS
Wash & trim the green beans. Boil them or steam them for just a few minutes, or until they get bright green.

Meanwhile, heat oil in a small skillet and sautee the garlic until it gets soft & mellow.

Once the garlic is done, add the green beans to the skillet (I started them both at the same time and the green beans & garlic took about the same amount of time). Toss till combined. Add salt & pepper to taste. Sprinkle with a bit of freshly grated Parmesan cheese, if desired.
Posted by Elizabeth at 3:18 PM 2 comments:

This is a great dish for those nights you've had a long day and really don't want to spend much time cooking. It has great depth of flavor and a nice spicy kick. The best part was that it only took about 15 or 20 minutes from start to finish. 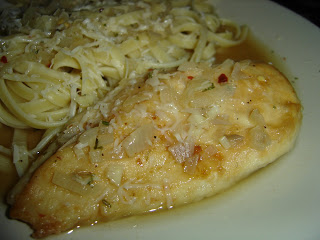 Chicken in Garlic Broth
Recipe from Mary Ellen's Cooking Creations, adapted
Serves 2
Total Cook & Prep Time - 20 minutes
INGREDIENTS
2 chicken breasts, pounded a bit
1 TBSP butter & 1 TBSP olive oil
Flour, for dredging
Salt & Pepper
4-5 cloves garlic, minced
1 small onion, diced
1/4 - 1/2 tsp red pepper flakes
1/4 cup dry white wine or chicken broth
1 cup chicken broth
1/2 lb cooked fetuccini
Grated Parmesan cheese, optional
DIRECTIONS
Cook pasta to al dente. Drain & set aside.
Meanwhile, heat butter & oil in a large pan over medium heat. Season chicken with salt & pepper and then dredge in the flour. Cook chicken until cooked through, about 5 minutes per side. Transfer to a covered dish or the oven to keep warm.
Add a bit more oil to the pan if it is dry, and then sautee the garlic and onions until onions are soft. Add red pepper flakes.
Add wine and scrape up any brown bits, then add chicken broth and bring to a simmer. Simmer for about 5 minutes. Toss pasta in the broth. Return the chicken to the pan and cover the chicken in broth.
To serve, pour some sauce over the chicken and serve next to the pasta. Top with Parmesan cheese.
Posted by Elizabeth at 6:51 PM 1 comment: