Now that Thanksgiving is over, I feel the need to talk about the Thanksgiving turkey. We spent turkey day with my in-laws this year. Apparently, they're on a quest to find the biggest turkey possible. This year, there were 4 of us at dinner, and the turkey was 30 1/2 lbs. Yep, you read that right - almost 31 lbs. Easily, this was the biggest turkey I've ever seen. I secretly think it was one of those ginormous show turkeys they have every year at the state fair.

I don't want to be too deceiving, though. They did bring a turkey dinner to my sister-in-law and some of her colleagues, who were on-call at the hospital on Thursday. When they bought the turkey, they were planning on serving 4 or 5 at the hospital. So, they planned on having this 30+ lb turkey feed a max of 9 people. Apparently everyone eats over 3 lbs of turkey. I think about 10 people at the hospital actually ate what they brought, though.

The pictures I took with my camera phone don't quite do the turkey's size justice, but I had to post a couple of them anyway. 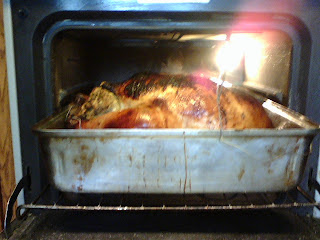 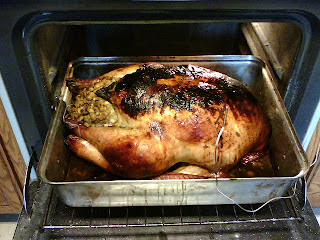 Despite its huge-ness, the turkey was delicious. I'm looking forward to finishing off our leftovers. I'll be posting about my spectacular pies soon.
Posted by Elizabeth at 10:49 AM 1 comment:

A little spoonful of heaven

That's all I wanted to say.
Posted by Elizabeth at 5:02 PM No comments: