Sometimes I think I shouldn't be allowed at the Farmer's Market. When I get there, I all of a sudden think I'm a hippie nature girl that will have no problem eating tons of vegetables. So, I buy several baskets of tomatoes.... and then realize that only one of the two of us in my household actually likes tomatoes (and that one would not be me). There's something about the texture. I like them cooked, but raw is another thing. I considered buying "rainbow" carrots. I even considered buying some fresh broccoli, until I reminded myself that I think the stuff tastes like grass.

Anyway, back to the tomatoes. I used most of them to make homemade tomato sauce, but when you combine the leftover two with the abundance of ripe tomatoes in my back yard, I needed something to do with them, and quickly. So, I came across this recipe and thought it would be a tasty way to use up those tomatoes. And it was. The sauce was practically jumping with the flavor of the roasted tomatoes and when combined with the hint of dijon mustard, it created the perfect amount of tang. When you add it to the chicken, it was one very delicious, very late-summery dinner. 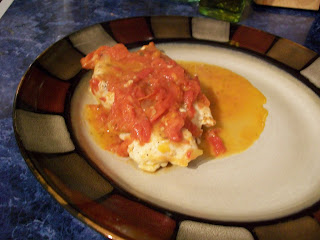 My favorite pizza, hands down, is a pizza margherita. A nice crispy crust, a fresh tomato sauce, fresh basil, and mozzarella is all I need. I've been on the hunt for the best pizza margherita since the first time I got back from Italy (12 years ago... *feels old*). I found it a few years ago at a restaurant in Minneapolis, but I don't have the time to drive up there every time I get a craving. By the way, if you're a twin cities resident and you read this blog, please don't recommend Punch. I've been there. Yes, I know they claim the owners are from Naples. Their pizza sucks donkey balls.

During this process, I also discovered that I get irrationally annoyed when people call something margherita but it's clearly not. I was at a pizza place not too long ago where their margherita was advertised as having olives on it. Another one had goat cheese and gorgonzola. I'm pretty sure I saw one once that had bacon on it. Maybe delicious... margherita, not so much.

I also discovered a few places that spell it like the Mexican-ish blended tequila cocktail. I half hoped the pizza had some form of liquor and lime incorporated. But no.

When we were watching an episode of Good Eats not too long ago, we decided we had to give making our own on the grill a go. And despite the fact that pizza should be delivered to my house in about an hour, I venture that this stuff is better than anything you can get at most pizzerias. 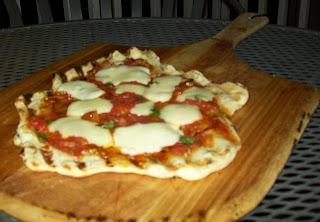 DIRECTIONS
Make your dough and roll it out so it's pretty thin - use your judgment how thin, but I'd say we usually do somewhere between 1/8 and 1/4 of an inch thick. Lay it on a greased pizza peel or the back of a cookie sheet.

Oil your grill grates and preheat the grill to medium.

Once heated, brush your dough with about 1-2 tsp of oil and put your dough on the grill and cook for about 3 minutes. Take it off the grill, brush the raw side with oil, and flip it over.

Put the tomatoes on the grill and cook them until they're nice and soft and mashable. This should take somewhere between 5-10 minutes (it usually takes us about 8).

Put the tomatoes on top of the dough (cooked side) and mash up to make the sauce. Put the torn basil leaves on top of the sauce and top with sliced mozzarella. Return to the grill and cook until the crust is done and the cheese is melted, about another 2-3 minutes. Let cool a bit before cutting and eating.
Posted by Elizabeth at 5:50 PM 2 comments: