I said a couple days ago that I'd soon be writing about all the wonderful food we ate in Iowa City over Memorial weekend. It's time.

We went to Iowa City for the express purpose of eating all the food that my husband loved in college. I'd been to a couple of them, but most were new to me. It was a fun weekend.

We started out with cheeseburgers at a tiny dive bar called George's. My husband says he knew vegetarians that made exceptions for George's cheeseburgers. Apparently at one time this place was called George's Buffet, but it's about the farthest from a buffet you can get. I think the food options were hamburger, cheeseburger, and chili. That's it. I was impressed. While too heavy on the mustard, it was an excellent cheeseburger. Definitely go if you're in the Iowa City area.

Next was a beer & some little beer battered cheese at Brother's. It's a pretty typical college bar in every way, but the outdoor patio was nice and the cheese was good.

Dinner was a calzone at Sam's Pizza. This place was the inspiration of the entire trip. I'd been there before. My husband raved about the calzones all the time, and when I had my first, I thought it was good, but nothing special. But the next day, I wanted another one. Three days later, I still wanted another one. A week later, still wanted another. In fact, I'd like one right now. See for yourself - doesn't it look delicious? 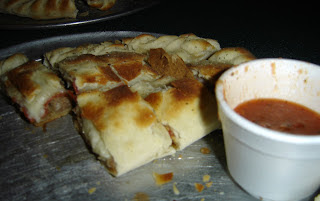 Before going back to the hotel, we stopped for a drink at The Sanctuary. I wish Minneapolis had a place like this.

In the meantime, we made several trips to The Dublin Underground. It's a tiny little Irish pub that serves a beer called Dempsey's. It's actually brewed in Wisconsin, but it was tasty nonetheless. If you ever find it in a liquor store or on tap, try it. Again, why doesn't Minneapolis have a place like this?

We finished off the trip with lunch Monday at Micky's Irish Pub. It's nothing special, just a small bar & grill with good sandwiches.

Oh, and the funniest part of the trip: 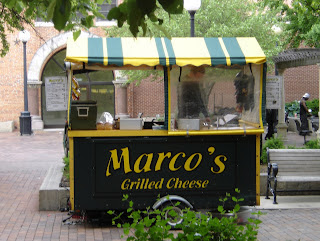 You saw that right - that's a grilled cheese cart.
Posted by Elizabeth at 8:05 AM 1 comment:

Over Memorial Day weekend, we went to Iowa City, IA - basically for the sole purpose of eating at a few of the places my husband loved from college. So, I could go on and on about how wonderful those places were (and I will), but before I do that, I'm going to write about something completely non-food-related: a pet store. Odd choice, I know, but you'd understand if you had any inkling how much I love my cats.

We were walking around the area near the university and came across a store that had some cats playing in the window. They were cute, so I had to go in. On the way in, I noticed a "stop puppy mills" sign. I was intrigued, but admittedly a little confused why a pet store would be anti-puppy mill. Turns out, this was definitely not your traditional pet store.

This place rescues animals from kill shelters and other bad situations, and people can bring in abandoned animals or those found in parking lots, dumpsters, etc. It takes care of them, nurses them back to health (if necesssary) and puts them up for adoption. It appeared that they focus on cats, dogs, and rabbits, though I wouldn't be surprised if that's just what they had recently rescued. I mostly went around and played with the cats. They all had spacious living areas, toys, and a companion or two.

They had pictures of every animal they've adopted out, with its new owner, lining the walls - I think the number was over 1200, and the store has only been open a couple years. I wish I could've taken a couple home with me to make room for them to take in more animals. I encourage all of you to support places like this in your area and consider adopting pets - they improve your life in more ways than you can imagine.
Posted by Elizabeth at 7:48 AM 2 comments:

Labels: About Me, Completely Non-Food-Related

Image from GrandmasRestaurants.com
Today, May 22, 2008, Grandma's Restaurant on the West Bank of the University of Minnesota will close it's doors for good. The restaurant has operated from its West Bank location since 1981.

Your cheeseburgers and mozzarella sticks will be deeply missed. You will never be truly replaced.


Please don't close.
Posted by Elizabeth at 3:24 PM No comments:

Rachael Ray calls this "That's Shallota Flavor Spaghetti." I think that's hokey. In fact, the name turned me off from making it for a while, so I decided to give it a new name. I really enjoyed this and would recommend it. Don't let the 10 shallots scare you away- they mellow as you saute them. I hope you enjoy it. I made a couple changes and have noted them below in italics. 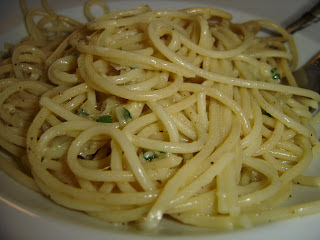 DIRECTIONS
Heat the extra-virgin olive oil with the butter over medium-low heat in a skillet with high sides. Add garlic and shallots and season with salt and pepper then cook gently until caramelized about 20 minutes, stirring occasionally. This took me only about 10 or 15 minutes

Meanwhile heat a large pot of water to boil for pasta, salt the water very liberally then add spaghetti and bring to a rolling boil. Cook to al dente. Add 2 ladles of starchy cooking water, about 1 cup, to the shallots and stir (I used chicken stock instead of starchy water). Drain pasta and add to shallots. Add the parsley and cheese and more black pepper, to taste. Toss 1 to 2 minutes for liquid to absorb and serve.
Posted by Elizabeth at 6:28 PM 3 comments:

Tonight we're having a Wii party/birthday party for my mother-in-law and sister-in-law. We'll be serving the following:

If you haven't figured it out yet, we love Italian food. Really love it. I personally think it's one of the best cuisines available. I think I could eat spaghetti with marinara sauce pretty much every day, and my husband thinks the same about pizza. I made up this recipe after looking at a bunch of recipes on CookingLight and FoodNetwork and playing around with them. The end result was great. I loved the combination of spicy Italian sausage with tomatoes and cheese. It worked a lot better than ground beef does. I even think I'm going to submit this over to Ruth for Presto Pasta Nights. I hope you enjoy it, too. 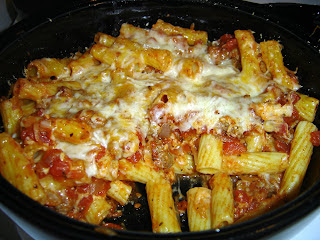 My husband thought the casserole dish looked cool. And because it's just that good, here's another photo of it. 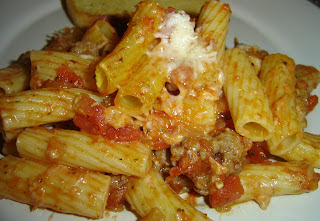 Brown sausage in medium skillet. When about halfway done, add onions and garlic and finish cooking. When sausage is browned, add tomato paste, salt, & pepper. Add tomatoes and basil and bring to a boil, stirring occasionally.

In a large bowl, combine sausage mixture with pasta. Toss to coat. Place half the mixture in a large casserole dish. Top with half the Mozzarella cheese, half the Asiago, and half the Parmesan. Repeat.

Bake for approximately 25 min or until the cheese is bubbly.

*I recommend serving this with garlic bread and a side salad. Have you figured out yet how much I like garlic bread?

I've been debating with myself whether to post this recipe. It's somewhat similar to the Fusilli alla Caprese I posted a while ago. In the end, I decided it's different enough (and tasty enough) that it warrants it's own blog post. I like it because it's nice and light, but yet comforting. 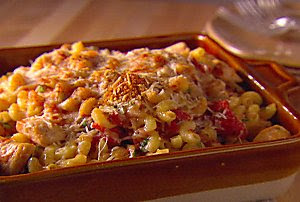 Bring a medium pot of salted water to a boil over high heat. Add the pasta and cook until just tender, stirring occasionally, about 5 minutes. Drain pasta into a large mixing bowl.

Meanwhile, put the olive oil in a medium saute pan over medium heat. Add the chicken and cook for 3 minutes. Add the onions and garlic, stirring to combine, and cook until the onions are soft and the chicken is cooked through, about 5 minutes more. Put the chicken mixture into the bowl with the cooked pasta. Add the canned tomatoes, mozzarella cheese, parsley, salt, and pepper. Stir to combine. Place the mixture in a buttered 8 by 8 by 2-inch baking dish. In a small bowl mix together the bread crumbs and the Parmesan cheese. Sprinkle over the top of the pasta mixture. Dot the top with small bits of butter. Bake until the top is golden brown, about 30 minutes.

In order to appreciate this dish fully, it's time for an Italian lesson:

Yes, Chicken Saltimbocca is delicious. It's full of flavor and... well... it's wonderful. Let's face it - the name is just cute. 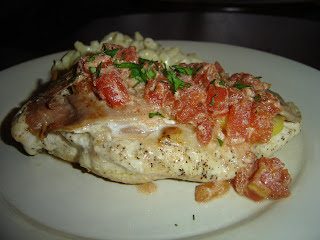 DIRECTIONS
Place the chicken on a work surface and season with salt and pepper. Place a slice of lemon on top of each. Top with 1 leaf of sage. Lay a large piece of prosciutto on each and press to seal. (I used toothpicks)

Warm the olive oil in a large skillet over medium-high heat. Place the veal chops in the hot oil, lemon side down. Saute until the prosciutto starts to caramelize, about 2 minutes. Turn the veal over and saute for another 2 minutes, or until chicken is cooked through. Remove to a platter and set aside.

Deglaze the pan with the white wine, scraping up the brown bits from the bottom of the pan with a wooden spoon. Add the chicken broth and reduce by half. Add the tomatoes, cream, salt, and pepper. Stir until combined and hot. Pour the sauce over the veal and top with the remaining 1 teaspoon finely chopped sage (I used parsley). Serve immediately.


I served this with the pasta side I made with Chicken Rollatini. It complimented the dish well.

Posted by Elizabeth at 6:35 PM No comments: