I've never really been much for Thai food. In fact, I'm pretty comfortable saying that I don't like it. There's a Thai restaurant in Minneapolis that everyone goes gaga over. I don't see what's the big deal. So it might sound weird when I say that when I saw this recipe pop up on my google reader, I knew I had to make it. Elly's musings on her thoughts about Thai food rang really true for me. She says “I’m not crazy about peanut sauces, I don’t like cilantro, and I’m hesitant about coconut milk in savory food. And when you take away those three things, that leaves you with … well, not Thai.” Except I take that one step further – I also don’t like Thai Basil. So, when I read on to see that she really liked this recipe, I was in.

Then, I read the ingredients. I had never heard of Golden Mountain seasoning or Black soy sauce. I read how Elly had to trek across town to try to find them. Seeing as I’m pretty sure Elly lives in Chicago, I thought I was doomed to try to find them in the St. Paul suburbs. Much to my surprise, I was able to find them both at the regular grocery store down the street – granted, in bottles so large I’m fairly certain I now have a lifetime supply.

This was really good. I wish it would have been even spicier, so I think I would use either more Sambol Oelek or chiles next time. I also think I would’ve liked it with more crunchy veggies instead of noodles for some different textures – more bean sprouts, baby corn cobs, thinly sliced cabbage, matchstick bamboo… maybe even some matchstick zucchini. My husband, who generally dislikes the Asian cuisines, ate this without needing to make an emergency McDonald’s run, which I take as a compliment. 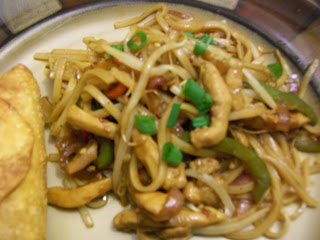 Cook the noodles according to package directions. Drain.

Meanwhile, heat oil in a heavy large pot over medium-high heat. Add garlic and sauté 30 seconds. Add bell pepper and chicken and sauté until the chicken is about half-way cooked, about 2-3 minutes.

Whisk the fish sauce, black soy sauce, Golden Mountain seasoning, and Sambal Oelek together in a small bowl. Add to the chicken mixture and cook until the chicken is done.

Add noodles, bean sprouts, and spinach and toss to coat. Cook for about a minute. Garnish with green onions.


UPDATED: I made this recently with matchstick carrots, bamboo, thinly sliced cabbage, and onions and omitted the noodles. It was amazing.
Posted by Elizabeth at 4:45 PM 2 comments: