Now Blogging from a New Location (and Taco Pizzas)

I know I've been gone for a while. Quite a while. I have a good reason, I swear! My husband and I bought a house and we moved! We're finally starting to get (at least a little) settled in. I'm still getting used to my new kitchen. It's been a process. But I do have a great recipe to share with you. I came up with this one when I was desperately trying to figure out what to do with various things from my pantry and freezer before we moved. I'm not completely sure why frozen pita bread inspired me to make chicken taco pizzas, but I went with it. At any rate, it was a good decision. You should do yourself a favor and make these. 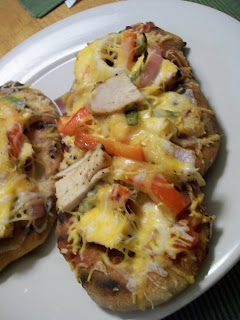 Grill the chicken breast and the veggies until chicken is cooked through and veggies are soft. Remove both from the grill and cut the chicken into narrow strips.

Brush the pita breads with some olive oil and put down on the grill. Let cook for about a couple of minutes and then take off the grill, flip over, and brush the other side with olive oil. Top with chicken, veggies, and Monterrey Jack cheese. Return to the grill and cook for a few more minutes, or until cheese is melted.

Serve with your favorite taco condiments, like salsa and sour cream.
Posted by Elizabeth at 8:36 PM 2 comments: